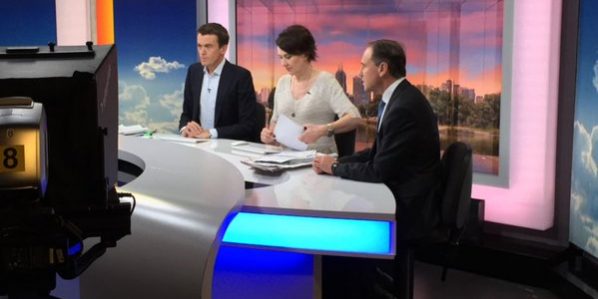 VIRGINIA TRIOLI:
The Federal Environment Minister Greg Hunt has just been there in Paris for preliminary talks and he joins us now in the studio.

Greg Hunt, good morning, thanks for making the time.

VIRGINIA TRIOLI:
So first of all tell us about your experience in Paris. Where were you when the attacks took place?

GREG HUNT:
So I had just returned. But where we were was on the south side of the river.

And the hotel I was at just a couple of days after I left was closed down and was subject to a security scare.

Obviously this is a challenge and a terrible outcome for everybody in Paris.

And Paris has been chosen because it’s a global city – it in many ways is one of the cultural capitals of the world.

And this is an attempt to cause damage, to break down Western confidence.

And people are determined that the conference goes ahead, (a) because it's of profound importance, (b) because it is a way of saying, we will not be deterred.

VIRGINIA TRIOLI:
Now scientists have made it clear that if we are to keep the earth below a two degree warming path, then almost all large coal deposits will have to be kept in the ground.

At a minimum, will Australia go to the Paris talks arguing for no new coal fired power plants?

GREG HUNT:
Well, actually what we are arguing for is the two degree limit.

So how you get there is a matter for each individual country.

And what we see is really two things.

Firstly, my belief is that the Paris process will deliver a two degree outcome, not in terms of all the pledges that are on the table now, but what is likely is that it will set up a process that will bring us to come back in 2020, and 2025, and 2030.

And there is a very strong commitment to that.

Secondly, what you find is Australia is one of the few countries in the world to have met and beaten our first, and now on track to meet and beat our second, Kyoto targets.

And we’ve set the highest per capita reduction on an equal basis of any G20 country.

VIRGINIA TRIOLI:
But can I just get you to answer that direct question, do you not agree that in order to keep us below that two degree path – you don’t agree with the scientists that we need to keep almost all large coal deposits in the ground?

GREG HUNT:
With respect, I think there are many ways of getting there. It is a combination of…

VIRGINIA TRIOLI:
So you don't agree with that particular point, you have a different perspective.

GREG HUNT:
No, no, that points holds if you didn't do other things.

There are a range of different things you do – you reduce what goes up, you increase what comes down.

VIRGINIA TRIOLI:
Of course, but that's seen by climate scientists as one of the biggest drivers of what goes up.

GREG HUNT:
I've met with many scientists, with great respect.

And that's why Australia was one of two countries that was applauded for our contributions at this pre-meeting, and in particular we were – one more thing please…

Will Australia be arguing either for or against any new coal fired power plants?

GREG HUNT:
Well no what we are arguing for, is for achieving the reductions. And then it's up to each country to determine that. Let me say this…

VIRGINIA TRIOLI:
[Interrupts] So you will be silent on that one?

GREG HUNT:
With great respect, this was not the debate or the discussion.

The debate or the discussion was about the overall targets, of achieving that outcome.

And let me give you an example. We’ve just achieved 45.5 million tonnes of emissions reduction with our auction last week – one of the most successful outcomes in the world.

And then Australia led, just prior to the pre-Paris talks, what's called the Montreal Protocol discussions.

That produced 90 billion tonnes of emissions reduction savings between now and 2050 under the ozone protection process.

So an extraordinary reduction.

VIRGINIA TRIOLI:
Sure. We are talking, as we know, from the Paris talks – and you are going to be there – we are talking about a world agreement here.

So let's keep going with those – what it seems the majority or the consensus view is and whether Australia is in step or not.

The OECD wants to phase out the export credit agencies providing money to coal projects. Will Australia argue for or against that?

GREG HUNT:
Well we are in line to be able to agree to that.

GREG HUNT:
But I think it's important to understand, we don't actually provide export credit on this front. Australia isn’t one of the countries. And then secondly…

VIRGINIA TRIOLI:
Sure, but we need to be part of agreements, don’t we?

GREG HUNT:
And I worked very constructively with other countries to help achieve that agreement.

The other thing of course is, there was a domestic subsidy for coal plants.

So we don't give money overseas for coal plants.

It was happening in Australia under the Labor Government, including cash payments of $1 billion in 2012 – an extraordinary thing.

VIRGINIA TRIOLI:
So tell me how you do see coal then playing a role, if it is to play a role in Australia's energy future?

GREG HUNT:
Look, it is currently part of our future, and we progressively transition.

What you’ve seen is a significant reduction in coal fired production in Australia as renewable energy has gone up.

We’ve had decreasing overall demand, and we’ve had increasing renewable energy, and therefore a decreasing supply in terms of coal as a proportion.

VIRGINIA TRIOLI:
But just before we let you go because our time is short, on the emissions reduction target that we are taking there – the 26 to 28 per cent from 2005 levels – Amber Rudd, the UK's Energy and Climate Change Secretary, says the pledges made by any country coming to this meeting have to be just the beginning, that we have to be able to stand in those meetings and call for much more stringent reductions.

Are you happy to do that?

And the point here is the way that Paris is going to be a success – and I believe it will, it will be a difficult negotiation – is that…

VIRGINIA TRIOLI:
[Interrupts] But you believe there’ll be that two per cent commitment, at least, coming out of that.

GREG HUNT:
Well I believe that countries will commit to the two per cent outcome.

And then the total pledges will make significant progress.

But the key mechanism – and this is exactly what we were discussing with the UK Secretary – is coming back every five years for reassessing and going progressively further.

As a country, what sets Australia apart is having met and beaten our targets not just once, but as we’ll announce next week, twice in a row – and then being prepared, with a plan, to actually achieve our 2030 targets and to come back in 2020 and 2025 to reassess constructively.

VIRGINIA TRIOLI:
Greg Hunt, we will leave it there. Thanks for your time

GREG HUNT:
Thanks a lot.