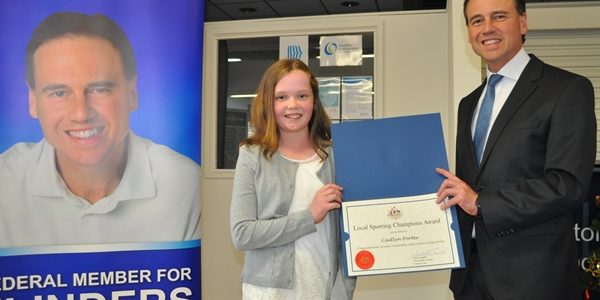 More than 20 local athletes from across the electorate who have received Local Sporting Champions grants over the past year gathered at a presentation with Federal Member for Flinders Greg Hunt so he could congratulate them on their sporting achievements.

“I was delighted to meet the dedicated young athletes who have been recipients of Local Sporting Champions grants,” Mr Hunt said.

Grants are awarded three times a year to young athletes in the Flinders electorate who are competing in events across the country and internationally.

Each Local Sporting Champion recipient receives $500 to go towards the cost of travel, accommodation, equipment and uniforms to enable athletes to participate in a particular championship or event.

“It was fantastic to have so many talented athletes in one place and to hear their stories,” Mr Hunt said.

“We heard from athletes as young as 11 years old, who have competed on the world stage or are at the top of their chosen sport at either a state or national level.”

The youngest athlete recognised at the presentation ceremony was 11 Caitlyn Porter from Bayles, who has won several state and national equestrian championships in the novice category for juniors in dressage.

Caitlyn has been horse riding since she was three years old and wants to go as far as she can with it.

“I took out the Nationals Championship in September in Sydney and I hope I can make it through to the Nationals again next year,” she said.

“I hope I can make it to the Olympics one day. It’s hard work but it’s a lot of fun.”

Applications for the next round of Local Sporting Champions grants are now open until February 29, 2016. Applications should be received before the competition start date. Visit www.ausport.gov.au for more information.

Local Sporting Champions grants recipients who were presented with certificates:

*Photographs and contact details of all recipients are available on request