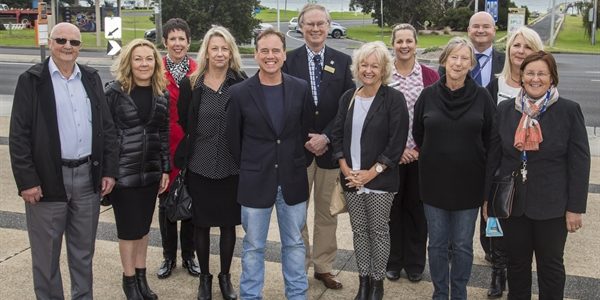 Federal Member for Flinders Greg Hunt MP visited Rye on Friday to meet with community members to announce the transfer of funds to the Mornington Peninsula Shire Council for the installation of CCTV cameras.

“I am delighted that the Turnbull Government has provided $200,000 for the installation of six CCTV cameras on the Rye foreshore and shopping precinct,” Mr Hunt said.

“This delivers on the Turnbull Government’s election commitment to help keep communities safe and reduce crime and anti-social behaviour.”

Mr Hunt said the funding had been committed under the Coalition’s $40 million Safer Communities Fund.

“The Rye community has been lobbying for CCTVs since the tragic death of David Cassai in Rye on New Year’s Eve 2012,” Mr Hunt said.

“This fatal one-punch hit took the life of an innocent young man and sent a ripple-effect through an entire community.

David’s mother Caterina Politi applauded the funding for CCTVs and said she hoped they would assist in reducing violent and anti-social behaviour.

“I hope the cameras only capture butterflies, rather than violence” she said.

“Cameras are one way of helping to deter people from committing crimes and paired with other measures they all contribute to making our streets safer.”

“In the unfortunate event of an incident, these cameras are incredibly important.”

“We thank the Federal Government for their contribution to the community of Rye,” Cr Colomb said.

“Our community has shown a desire for CCTV systems to help improve the safety of our townships.

“The Shire will continue to work with the State and Federal Governments on programs like this to create safer places for us all to live.”

“Footage from the cameras will be monitored in Rosebud and will be used by Victoria Police in the event of an incident in the area,” Mr Hunt said.

“Everyone has the right to feel safe in their community and these cameras will send a clear message to any would-be offenders that they will be caught.”

“Only safe communities can be strong and prosperous, and the best way to tackle crime and anti-social behaviour is to prevent it happening,” Mr Hunt said.

“The installation of CCTV cameras will make Rye a safer place for both residents and visitors.”