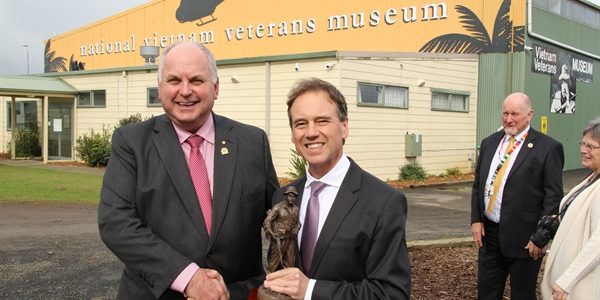 Federal Member for Flinders, the Hon. Greg Hunt MP, is pleased to announce a significant $5 million investment by the Turnbull Government into the Phillip Island Vietnam Veterans Museum.

The Museum has collected over 20,000 artefacts from the campaign, educated locals on an often forgotten war and provided a focal point for Vietnam Veterans across Australia.

Funding for the project will assist with land purchase, design, site preparation and infrastructure upgrades.

The funding announcement comes after the recent 50th Anniversary of the Battle of Coral-Balmoral – the biggest and longest Australian battle of the Vietnam War.

The funding marks the beginning of a five year project to be completed by 2023, to coincide with the 50th Anniversary of the withdrawal of the last Australian troops from Vietnam.

Minster Hunt said the investment would provide much needed assistance to the museum to continue to educate the public and provide a fitting tribute to the veterans of the war.

“This injection of funds will provide the Museum with the capital to undertake necessary works to see their new museum site go from conception into reality,” Mr Hunt said.

“As we acknowledge the recent anniversary of the Battle of Coral-Balmoral, where 26 Australian soldiers were killed and a further 100 were wounded, we join with the Phillip Island Vietnam Veterans Museum to ensure the memories of those lost on the battlefields are properly remembered.”

Minister for Regional Development, Territories and Local Government, Dr John McVeigh said the museum sought to remember, interpret and understand the experience of the veterans of Australia’s longest war and its lasting impact on society.

“This museum was created and continues to be sustained by passionate local volunteers, and the Coalition Government is pleased to be able to support them to continue their work,” Dr McVeigh said.

“Already home to a diverse range of artefacts, this funding will assist the museum to keep the legacy of veterans alive by investing in enhanced facilities, technologies and exhibits.”

Chairman of the Phillip Island Vietnam Veterans Museum, Mr Kingsley Mundey AM, said the funding was welcomed by the Museum and the local Phillip Island veteran community.

“This Museum is a cathartic place for veterans to remember, talk, and reflect on a time and place that so significantly impacted their lives,” Mr Mundey said.

“This timely contribution by the Turnbull Government is not only a mark of deep respect but is also a tremendous contribution towards the legacy of Vietnam Veterans.”

“I particularly want to thank Minister Hunt – he has one of the busiest portfolios in cabinet, but he has always remained true to his local constituency despite his heavy workload.

“I know firsthand that he has worked tirelessly and fought hard to get us these funds, and I want to thank him personally for his hard work.”

Victorian President of the Vietnam Veterans Association of Australia, Major Bob Elworthy AM, echoed Mr Mundey’s comments saying: “This generous financial support from the Federal Government will inspire Vietnam Veterans to re-double their efforts to help create a museum they can be proud of.”