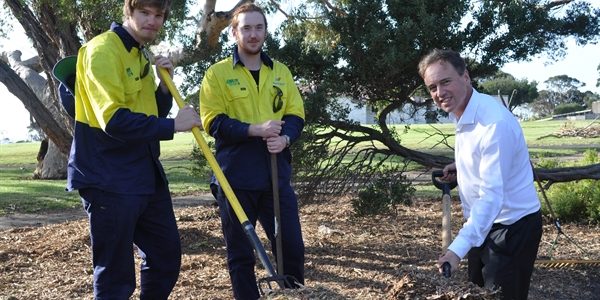 The Mornington Peninsula and Western Port region is hosting ten projects under Round Four of the Coalition Government’s Green Army programme.

Flinders MP and Environment Minister Greg Hunt said the ten local projects across the Dunkley and Flinders electorates would benefit the habitats of our native species for years to come.

“I was delighted to visit Police Point on Friday to see the work the Green Army team is completing at Portsea,” Minister Hunt said.

“These enthusiastic Green Army team members have done an incredible job restoring the habitat of the long-nosed bandicoot as well as rehabilitating the surrounding parkland.”

Minister Hunt said the ten projects would benefit the natural habitat across the entire region.

“Activities such as improving Ramsar listed sites at Western Port and the Tootgarook Swamp have an enormous benefit on local flora and fauna,” he said.

“Parks Victoria has engaged a team to complete works at several sites, including measures to reduce the threat of foxes and feral cats.

“These teams will be spread across the whole peninsula, offering diverse employment experiences for young people who are interested in learning about environmental work.”

Minister Hunt said the partnership between local councils, friends and environmental groups had been fundamental in the success of the Green Army programme.

Works to protect threatened species through actions to minimise predation from foxes and feral cats as well as protection of Indigenous cultural heritage sites and delivering improvements to local wetlands will take place across the Flinders and Dunkley electorates.

Former Federal Member for Dunkley Bruce Billson said these projects would build on the good work that had already been carried out by Green Army teams.

“It has been terrific to see the improvements Green Army teams have already delivered across Mornington and Mount Eliza and these projects will help our native flora and fauna to continue to thrive,” Mr Billson said.

“The participants and volunteers from the friends and environmental groups who work on these projects do an amazing job making our natural environment a better place for everyone to enjoy,” Mr Crewther said.

“As well as significantly enhancing our natural environment, the Green Army also provides participants with skills and experience they can use to advance their careers or further their studies,” Mr Crewther said.

Young people, aged between 17 and 24 years, interested in joining these new projects will be able to apply through the appointed Service Provider.

For a full list of approved Round Four projects or to apply to join the Green Army, visit www.environment.gov.au/green-army