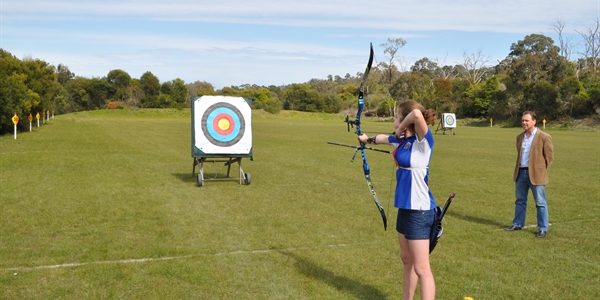 Like many young people her age, Bridget Allan’s interest in archery was inspired by the popular book and film series The Hunger Games.

After being captivated by the films she begged her mother to take her along to an archery day at Frankston Archery Club and has never looked back.

“This is a fantastic effort and I commend Bridget on her recent achievements,” Mr Hunt said.

“Bridget used a Federal Government Local Sporting Champions grant to update her equipment before heading to the championships, which is exactly what these grants should be used for.”

Bridget said she enjoyed archery more than she could have ever anticipated.

“It’s even better than what I expected. I love getting out there and competing,” she said.

“I want to take it as far as I can. Maybe even compete in the Olympics someday.”

Local Sporting Champions grants are awarded three times a year to young athletes in the Flinders electorate who are competing in events across the country and internationally.

The $500 grants contribute to the cost of travel, accommodation, equipment and uniforms to enable athletes to participate in a particular championship or event.

“I encourage young athletes, competing in events across the country, to apply for the grants,” Mr Hunt said.

Applications for this funding round close October 31. All applications should be received before the competition start date. Visit www.ausport.gov.au for more information.

Applicants must be turning 12-18 in the year of the competition.