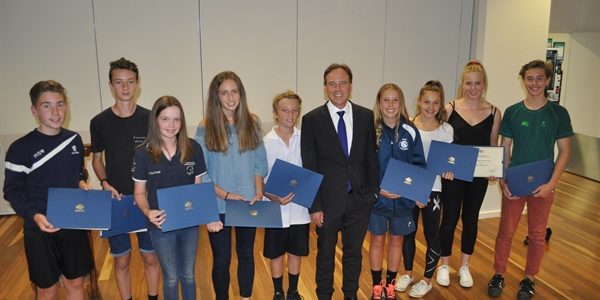 Greg Hunt congratulated several local athletes from the electorate who have been recipients of Local Sporting Champions grants over the past year at an official presentation ceremony held on February 17.

“I was delighted to meet these dedicated young athletes and learn more about their sporting accolades,” Mr Hunt said.

“Some have competed for their state or for the country both nationally and abroad.”

Local Sporting Champions grants are awarded three times a year to young athletes in the Flinders electorate who are competing in events across the country and internationally.

Gavin O’Reilly, 13, has been playing soccer for six years and is hoping to join the English Premier League one day.

“I love the opportunities you have with sport. Every week you are able to build on your skills and improve your game,” Gavin said.

“I have played for the Victorian Under 14 team and am hoping to play with them again this year.”

“The dream is to play professional soccer for Manchester United one day.”

The Local Sporting Champions grants of $500 per athlete contribute to the cost of travel, accommodation, equipment and uniforms to enable athletes to participate in a particular championship or event.

Applications for the next round of Local Sporting Champions grants open 1 March and close 30 June. Applications should be received before the competition start date. Visit www.ausport.gov.au for more information.