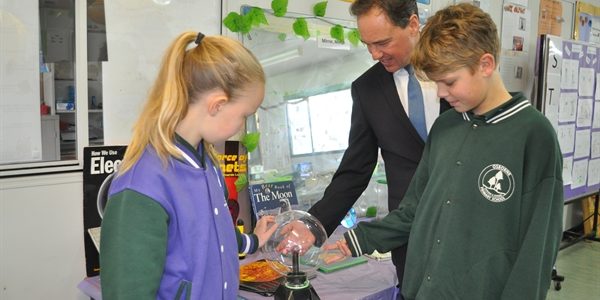 As Minister for Industry, Innovation and Science, it is my pleasure to launch National Science Week locally at Osborne Primary School in Mount Martha.

Osborne is one of many schools taking part in National Science Week 2016, which runs from August 13-21.

Osborne will host its very own Science Expo here at the school on August 17, where students and parents can get involved in a variety of hands-on experiments to expand their knowledge of the world around them as well as testing drones, droids and robots.

Science week is a terrific opportunity for children and adults to meet scientists, discuss the hot topics in innovation, create science experiments and celebrate its cultural and economic impact on society.

In the Flinders electorate, National Science Week is set to excite people of all ages with everything from a science film night at the Briars Astronomy Centre to science for tiny tots at Rosebud Toy Library.

These events will be engaging students – tomorrow’s leaders, scientists and innovators – through quizzes and demonstrations, such as chemistry construction using marshmallows.

Local residents can also contribute to real scientific research by participating in the ABC’s National Science Week citizen project Wildlife Spotter – spotting and photographing animals such as bandicoots, birds, possums, foxes and rabbits. These citizen scientists will identify animals in roughly a million images taken all across Australia by automated cameras.

The Government recognises the importance of science to Australia’s economy and our future, which is why we invested $9.7 billion in science, research and innovation in 2015-16.