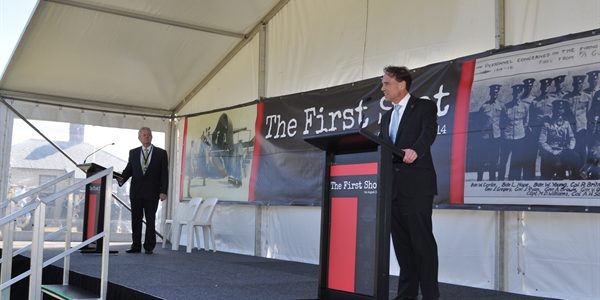 I was delighted to join the local community, dignitaries, visitors and veterans at Point Nepean today to commemorate the 100th anniversary of the British Empire’s first shot of WWI.

This momentous occasion is an opportunity for reflection on Australia’s involvement in the war and to honour those who served.

It was 12:45pm on August 5, 1914 – a little more than three hours after war had been declared in London – when the first shot of WWI was fired from Fort Nepean in order to prevent the German merchant vessel SS Pfalz from escaping Port Phillip to the open seas. The shot was successful –the Pfalz surrendered.

All of the military personnel involved on that day performed their duties commendably. None would have had any idea then how irrevocably the world had changed, even as the echoes of their fateful shot reverberated through the remote coastal fort.

We have every reason to be proud of the bravery and courage of our Australian troops. It is because of their efforts that we are able to gather as members of a free, peaceful and prosperous nation.

The loss of more than 60,000 Australian lives in WWI from a total population of less than five million at the time meant that few, if any, Australians were left untouched by the devastation of war.

Many soldiers returned home to resume their lives of work and family, bearing the scars of their wartime service, in body, mind and soul. We remember also the thousands of Australian women who served in the war in countless and diverse roles.

The Federal Government committed $10,000 through its Anzac Centenary Community Grants program to this commemorative event, as well as significant resources on the day with the Federation Guard and Royal Australian Navy Band playing a large part in the proceedings.

Perhaps the most important function of a commemoration such as this is to instil to a new generation an understanding of this history, of their history.

It is fantastic so many school children could be involved in the commemorations and I can only impress on them how important it is to remember the spirit of the Anzacs and what they fought so hard for.

I commend everyone who has been involved in bringing this commemorative event to life, including the Sorrento Portsea RSL, Parks Victoria, the Mornington Peninsula Shire and the Victorian Government. I would particularly like to thank Major Bernie Gaynor of the Australian Defence Force, whose passion and enthusiasm has driven this project from the start.