Threatened species strategy on track for 2020 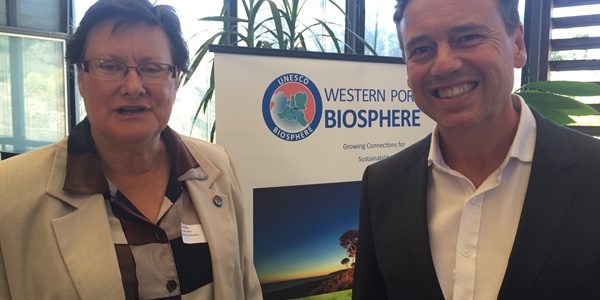 I am delighted to provide an update on our work for threatened species at the Western Port Biosphere’s Biodiversity Forum, which shares the strategy’s focus on science, action and partnerships.

Under the Western Port Biosphere project, supported by Australian Government funding, 184 hectares of remnant vegetation will be protected and 36 hectares revegetated by the end of this year in this wildlife-rich region south-east of Melbourne.

Landcare groups, councils and park managers are working together to help connect and improve wildlife habitat corridors. The project will help species such as the southern brown bandicoot and the hooded plover, one of the 20 priority birds under our Threatened Species Strategy.

A local predator control strategy is also in place in the Western Port Biosphere, supported by camera-trap monitoring of feral cats, foxes and the southern brown bandicoots they prey on.

This is just one of the many impressive local partnerships for conservation now in place, contributing towards our 2020 targets. Every community that joins the fight against extinction makes the task more manageable.

Australia’s first Threatened Species Strategy is on track to achieve its 2020 targets and is already delivering real wins for our native animals and plants.

Less than a year on from its launch, this new roadmap to help fight extinctions of our native flora and fauna is benefitting at-risk species with targeted, practical action. With almost 1800 of our species listed as threatened, Australia needs to work harder and smarter to secure their future.

Since 2014, the Australia Government has:

• mobilised $208 million under the National Landcare Programme, Green Army, 20 Million Trees and other programmes in projects that benefit nationally-listed species and tackle one of their biggest threats, feral cats
• announced 20 mammals and 20 birds as priority species under the strategy, committing to improving their trajectories by 2020 and funding recovery actions for each of them
• ensured recovery plans or advices are in place or near completion for all 40 priority species
• convened a new taskforce to tackle feral cats, with the Threatened Species Commissioner Gregory Andrews chairing these meetings of state and territory officials, scientists and key non-government organisations
• secured agreement from all states and territories to prioritise feral cat management in threatened species recovery programmes and approached all councils and natural resource management organisations to intensify local eradication efforts
• worked towards a common approach for assessing threatened species for listing as well as improved practices for recovering species
• initiated research projects under the $30 million Threatened Species Recovery Hub that are now delivering early findings and shaping the future direction of the Threatened Species Strategy.

The Western Port Biosphere helps to provide an important habitat for the Southern Brown Bandicoot, which has recently had its listing status as an endangered species re-assessed.

I can announce here that I have agreed with the recommendation of the Threatened Species Scientific Committee that the Southern Brown Bandicoot remain in the endangered category.