The Morrison Government is investing $353.9 million over the next four years as part of the 2021-22 Budget to support women’s health, including funding for cervical and breast cancer, endometriosis and reproductive health.

This significant investment builds on our Government’s commitment to implementing the five priority areas of the National Women’s Health Strategy 2020–2030 and improving long term health outcomes for women and girls.

Minister for Health and Aged Care, Greg Hunt, said the Government was committed to improving health services around Australia for all women and girls, including Aboriginal and Torres Strait Islander people.

“As part of today’s significant investment, $13.7 million will help to reduce the rate of preterm births in Australia, which affect 8% of births in Australia and up to 16% among Aboriginal and Torres Strait Islander women,” Minister Hunt said.

“We are also listing Oripro® (progesterone) on the Pharmaceutical Benefits Scheme (PBS) from June 1, which is used to prevent women going into premature labour, saving around 14,250 women up to $300 per course of treatment.

“Currently only couples of individuals, who are carriers of serious genetic disorders can only access PGT if they are able to pay privately. We’re investing $95.9 million for five new MBS items, ensuring all Australians can access this testing.”

Minister for Women, Senator Marise Payne, said the Morrison Government’s investment in women’s health as part of the 2021-22 Budget would benefit Australian women of all ages.

“We’re also providing additional funding to improve the health and wellbeing of Australians suffering from Endometriosis. Affecting one in 9 women, Endometriosis can lead to severe chronic pain, and in some cases, infertility.

“Given over half the Australian population is made up of women, it’s important that we have equal access to health services and support. Our investment of $353.9 million into women’s health will benefit all Australians today and into the future.” 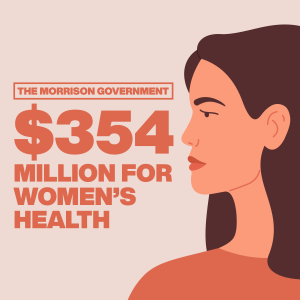