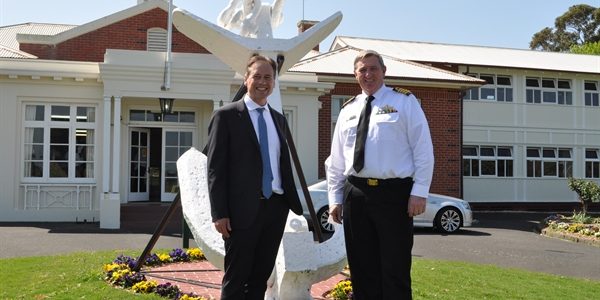 Flinders MP Greg Hunt said he was delighted that the future of HMAS Cerberus had been secured with $500 million in funding outlined in the Defence White Paper.

“This investment secures the long-term future of HMAS Cerberus as a Naval Training facility and will provide a welcome boost to the local economy in Crib Point both during the construction phase and into the future.”

“Defence is a major employer in the electorate, with more than 2000 Defence personnel based here, providing significant benefits to the local economy,” Mr Hunt said.

“HMAS Cerberus is the Navy’s primary training facility and will be critical in building a potent maritime and submarine warfare capability,” Mr Hunt said.

Cerberus Commanding Officer Captain Stephen Bowater said the funding would provide a significant boost to the base, allowing it to extend its capabilities and improve facilities for naval personnel.

Construction on stage one the Cerberus Redevelopment Project is estimated at $273 million and is due to commence in 2017-18. Works will continue for several years, through to 2025, with more than $200 million allocated for subsequent stages.

Mr Hunt said Australians could be confident the Turnbull Government would continue to deliver on its most important task – defending our nation and protecting and promoting our national interests.

“The White Paper sets out the Coalition Government’s comprehensive and responsible long-term plan to ensure Australia’s national security. It is the culmination of detailed analysis of our strategic environment, Defence’s priorities and objectives and the capabilities required to achieve these outcomes,” Mr Hunt said.

The Coalition Government will increase Defence spending by $29.9 billion over the next decade to deliver the strategies and plans set out in the 2016 White Paper available at www.defence.gov.au/whitepaper