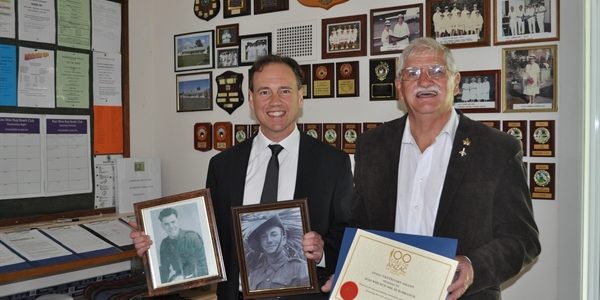 Koo Wee Rup’s Avenue of Honour will be enhanced in time for the Centenary of Anzac commemorations next year thanks to an $11,750 Commonwealth government grant.

“I am delighted to formally present this Anzac Centenary grant to the Koo Wee Rup RSL Sub-branch for the creation of a WWI Honour Wall and installation of plaques along the Avenue of Honour,” Mr Hunt said.

Koo Wee Rup RSL Sub-branch secretary Ivan Royle said the cenotaph and memorial walls were dedicated and opened in 2007 after many months of construction and hard work by the RSL and community members.

“We decided that an Avenue of Honour leading to the cenotaph memorial site would be a wonderful addition to honour the fallen war heroes of the district,” he said.

“With assistance from the Cardinia Shire Council, the Avenue of Honour has been planted with young, traditional oak trees.

“Thanks to this Commonwealth grant we will be able to complete the Avenue of Honour by 2015, in time for the Centenary of Anzac Commemorations.”

Koo Wee Rup RSL Sub-branch president Ron Ingram said the funding would allow the RSL to complete the project by adding plaques to the Avenue of Honour displaying the names and ages of local war heroes.

“The Sub-Branch can now move forward to finalise this project – a fitting tribute to the men of the district who laid down their lives so that we all can live the life we have today,” he said.

“It is vital that we record the history of those who fought for our country now so that is isn’t forgotten in years to come.”

Mr Hunt said he was looking forward to working with community groups across the electorate to deliver commemorations that would honour the nation’s centenary of service.

“The Centenary of Anzac will be the most significant national period of commemoration in our nation’s history and the Anzac Centenary Local Grants Program gives community members the opportunity to honour the service and sacrifice that epitomises the Anzac spirit,” Mr Hunt said.

“These grants will serve to commemorate the Centenary of Anzac and preserve the memory of those who so valiantly fought for our country.”

“Many of the projects awarded through the Anzac Centenary Local Grants Program will become permanent tributes to those servicemen and women who were involved in WWI.”