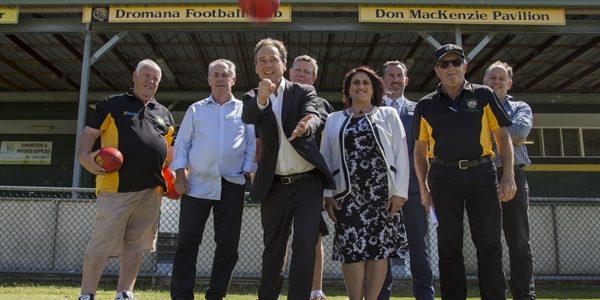 Member for Flinders Greg Hunt visited Recreation Reserve in Dromana to turn the first sod on the work to refurbish the Club’s change rooms to incorporate women’s facilities.

“I was delighted to visit the Dromana Tigers Football Club to turn the first sod on their construction works for new change rooms,” Mr Hunt said.

“This delivers on the Turnbull Government’s election commitment of $150,000 for Dromana Football-Netball Club for the redevelopment of unisex change rooms at Recreation Reserve to boost women’s participation in sport.

“This funding injection will allow the club to make the necessary improvements to their existing facilities to encourage more women to take part.”

Mr Hunt said it was great to see the works taking shape, with women’s numbers growing at the club.

“I look forward to watching the girls and women give it their all in the upcoming season,” he said.

“Mornington Peninsula Shire Council has done a terrific job in getting these works underway, with the change rooms expected to be completed early in the 2017 season.”

“The demand for local sports had grown significantly in recent years, especially for women and girls, which is why the Turnbull Government is committed to supporting women’s participation.

“Women make an enormous contribution to our local sporting clubs and this funding will ensure women’s numbers continue to grow.”

“These works are going to give us improved change facilities and a much-needed refresh and will enable us to host women’s matches,” Mr Strange said.

“Our junior girls are up and firing and we had a few of them represented in an inter-league match in Tasmania recently.”

The Dromana Tigers is looking for more women to join its ranks.

“Give it a go, it’s a lot of fun. It’s exciting and not too intimidating,” Mr Strange said.

“We want to have a strong presence in women’s football and to see the women’s competition gearing up on the Mornington Peninsula. These change rooms will go a long way to helping us progress the women’s teams as well as providing improved facilities for umpires.”

To join the Dromana Tigers, contact Chris Strange on 0414428153 or email
club@dromanatigers.com.au